Read the  ingredients! First ingredient is 60-80 % of a product. So if you have rye bread, rye should appear as the first ingredient. Anything else as the first ingredient would mean this is not a true rye bread.
If sugar (cane sugar, corn syrup or any other syrup etc) appears among the first three ingredients, don’t buy this item.
Sometimes there’s a sugar substitute added. If it’s Stevia, that’s fine. Otherwise – better to avoid.
Here’s a bunch of good examples:
Wasa crispbread: Rye is a first ingredient, no sugar. Very good item. Ezekiel bread or sprouted bread are also good. Just check out the list of ingredients.

Now a few examples when the label says one thing but the ingredients are totally different.

Orowheat rye bread is a good example of improper labeling. Dark Rye bread on the label. However, wheat flour is a first ingredient, rye appeares in a 4th place. 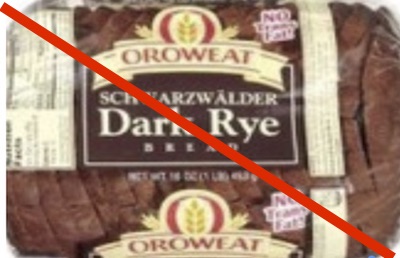 The above are good grains.

Do not buy granola. It’s just simple carbs with sugar. Notice – in the list of ingredients sugar is at the second place:

Sugar is being added almost everywhere, therefore keep an eye on the amount of it.
As mentioned in the beginning of the post, if sugar (sugar, cane sugar high fructose corn syrup, any other syrup) is one of the first three ingredients, pass on that item. As a sugar substitute, Stevia is acceptable. But for example Erythritol might cause tummy troubles.

Yogurt should have only milk and bacteria (cultures). If there’s any other ingredients (like sugar) – try finding a better yogurt. Look for plain yogurt без without additions. (fage, greek, wallaby etc.)
It’s healthier to add berries and honey. 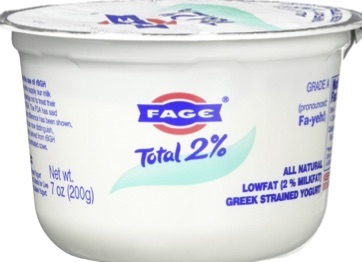 Almost any kind of milk will have around 14g of sugar. The exception is Fairlife milk and some vegan products. (Almond, etc., again – make sure there’s not too many additional ingredients besides milk) 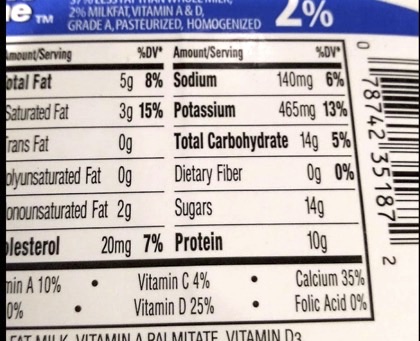 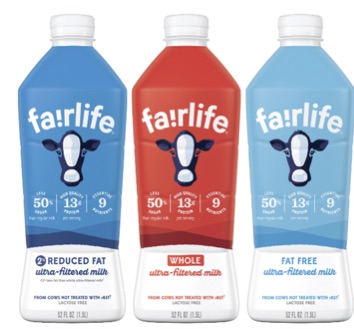 Take a look at the size of a serving. It might be a table spoon (for honey or butter), 28g for cheese (one slice), 240 gr for yogurt.
Again, make sure there’s not too much suger there.

A very important part of the nutrition facts list. We want to see about 22g of protein and very little sugar. For example, yogurt Fage: 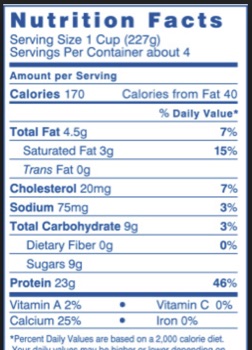 And here’s a negative example, DANNON: too much sugar (notice that the serving is smaller than that of Fage, and yet the sugar amount is much larger): 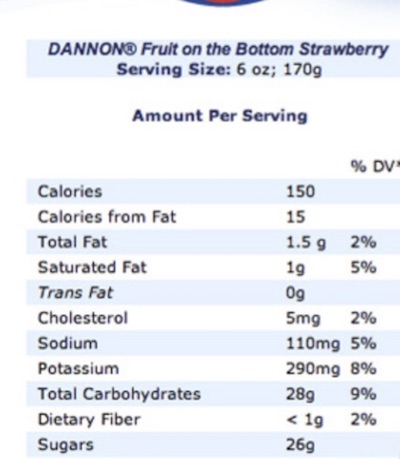 Salt is being added everywhere almost in the same way sugar is. For an optimal body function, we need about 600mg of salt, while the average daily consumption is 3,500mg – almost 6 times the norm! For example, a standard misu soup contains around 900mg of salt. Even in pre-cooked / pre-packed food, there’s usually lots of salt.

If sodium level is 5% or less, that’s great. If it’s 18% or higher, I recommend to avoid the food.
In absolute numbers: if an item contains more than 300mg of sodium, be careful with it. For example, a cup of cottage cheese usually has about 350mg of sodium and hence is not recommended. The daily portion of salt should not be higher than ~2,400mg.

Sodium causes the body to accumulate water and interferes with weigh-loss.

The daily norm of fats in an equilibrium state (you don’t want to gain or lose weight) is – as a rule of thumb – 1g to each 2 pounds of your weight. That is, if your weight is 120-130lb, your daily portion of fats should be around 60g. When you gain muscles or try to become leaner, the calculation would be a bit different and more personalized (that’s why I’m here).